What you should know about red light camera tickets 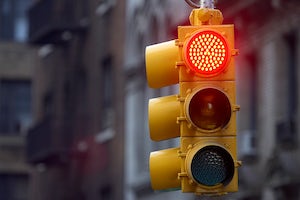 When coming up to an intersection, the traffic light turns yellow and you decide to drive through, rather than try to stop. You clear the intersection and think everything is fine, until you see the flash. You’ve been caught by the red light camera! Now what happens?

It’s important to avoid committing traffic violations as much as possible. If you accumulate multiple offenses, you may need to apply for a high-risk auto insurance policy that can be very expensive. Many of the large auto insurers in the Canadian market can even cancel auto insurance policies after just one conviction.

What Is A Red Light Camera Ticket?

A red light camera is a type of traffic enforcement camera. It captures an image of a vehicle that has entered an intersection in spite of a red light. Photos are automatically taken of vehicles that run red lights to assist authorities in enforcing traffic laws. Generally, the camera is triggered when a vehicle enters the intersection after the traffic signal has turned red.

How Do Red Light Cameras Work?

Since the program is intended as a deterrent to drivers and to change their behaviour, there are signs at every intersection that advise drivers that there is a camera present. Here’s some more information about how this program works:

Here is when you won’t be penalized for a red light camera ticket:

As running a red light is a traffic infraction, there are consequences to running a red light. Red light tickets are considered “hazardous infractions” and insurance companies may increase convicted drivers’ rates perceiving a higher risk of being in an accident or making a claim.

The Ministry of Transportation issues tickets to the registered owner of vehicles that are photographed by the cameras. The tickets include a photo of the infraction as well as the date and time of the offense.

Here are possible penalties for running a red light:

Here’s a pro tip from one of our brokers about running a red light:

It only takes a few seconds for a green light to turn red. If you're not paying full attention, it can be easy for you to completely miss a red light.

Is it possible to go to jail for unpaid red light camera tickets?

In most provinces, you do not go to jail for unpaid red light camera tickets, or any other unpaid traffic tickets. The unpaid amount may be taken off your GST rebate or tax refund. When you go to register your vehicle, the registry agent can refuse to register your vehicle until the fines on your file are paid. Driving without registration is a much larger infraction than a red light camera ticket.

What happens if I don't pay a red light camera ticket?

Depending on the province your car is registered in, the unpaid amount can be taken off your GST rebate or tax refund. When you go to register your vehicle, the registry agent can refuse to register it until the fines on your file are paid.

How do I handle a red light camera ticket if I was not the driver?

Infraction tickets are issued to the vehicle's registered owner, so although the owner may not have been driving, they are responsible for paying the ticket.