Could your clothes dryer cause a fire? 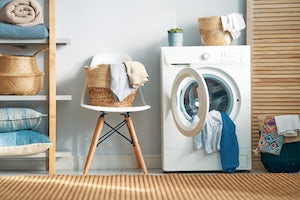 Pulling warm towels straight from the clothes dryer feels great, but do you ever stop to think that it’s a dangerous appliance? Probably not. But each year, clothes dryers are responsible for causing fires in homes across the country.

What causes the fires?

As your clothes tumble in the dryer they produce highly flammable lint. Many people assume that by emptying their lint trap between loads they have gotten rid of all the lint. But that may not be the case. Your dryer’s lint trap captures most of the material but pieces can escape through the vent or can get stuck inside the machinery. This can lead to two problems: first, the lint can become trapped inside the dryer and may reach the heating element and could cause the dryer to overheat or start a fire. The second problem is that lint can build up inside the dryer’s external hose and prevent the hot air from escaping. Forgetting to empty the lint trap or drying heavy lint-producing clothes increases the risk. In some cases, faulty dryers are to blame, but most fires can be prevented with proper dryer cleaning and venting maintenance.

In the past, laundry areas were built in basements and the dryer was set against an outside wall to make it easier for the vent to reach the outside. Many new homes and condos offer main-floor or second-floor laundry facilities. While this makes it easier to move loads of laundry, it forces the dryer’s vents to travel a longer distance. Hoses may need to bend and turn to reach the wall making it easier for lint to collect and harder to clean.

How should I maintain my dryer?