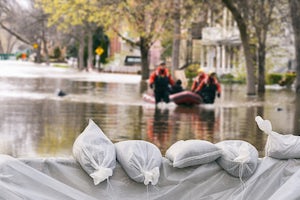 Each year in Canada an average of $310 million in insurance claims are made due to extreme weather and natural disasters. Natural disasters can happen at any time and can leave behind devastating results.

Canada is known for its cold weather, but over the past four years, our extreme weather has been taking over the headlines. According to Environment Canada, 2011 was the third year in a row that Canadians suffered record-high losses. Seven catastrophes hit Canada in 2011, up from five in 2010.

While costs have risen across the country, Ontario and Alberta have experienced some of the more costly events in recent history. In Ontario, the wind and rainstorm of August 19, 2005 caused $642.4 million in insured losses, while the second costliest event, the wind and thunderstorm in July 2009, cost $218.9 million in damages according to the IBC.

In Alberta, the costliest disaster was the recent Slave Lake fire where estimates, according to the Calgary Herald, put losses at close to $742 million. Prior to the fire, the July 2010 wind and thunderstorm in Calgary and southern Alberta was the second most expensive case of extreme weather in the province after causing $500 million in damages.

The repercussions from the Slave Lake fire are still being felt as residents attempt to rebuild some of the 500 homes and businesses that were lost in the fire. Often during the process of rebuilding, the cost of materials and supplies increases as the demand rises. A recent article in the Calgary Herald reports that many of the homes being rebuilt will be larger than the original home. In the case mentioned in the article, the family wanted their home to be designed differently in order to better suit their needs.